I have been working on a few odd projects this week. To be honest, getting out of bed in the morning is a challenge. September is a month of anniversaries and Billy's birthday. The first birthday since his death in January. I had some foolish notion that time would make things better to deal with... I was wrong. I have decided that I should not be so hard on myself and let myself have time to grieve and work through... sometimes.. just through a day...

I was rummaging through Diana's YouTube videos and decided that it was time to make her Entrelac Tote.

Eden and Charlie decided they wanted to share a cup of hot tea with me this afternoon. They both decided that hot tea was not ummm... their cup of tea... LOL!
Posted by TxDove at 10:13 PM 2 comments:

I am attempting to bust my yarn stash and find quick projects to make for new and expected babies. I have hand-knitted and machine knitted woolies or soakers out of 100% wool in the past for mothers that wanted them for use with cloth diapers. This particular diaper cover is for use to cover disposable diapers and not for the cover's ability to resist moisture.
I was reading Stefanie Japel's blog post "Soakers and a Tutorial (how to knit your own)" and thought... hmmmmmm... this might be something to make on the USM! O Lordy I'm brilliant! No? Any who... the diaper cover is a breeze to knit up. However, I will make some adjustments for the next one... 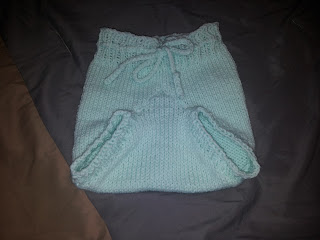 Oh... the piggie? Well she is tuckered out watching me knit...

MY NOTES: WARNING!! These are just notes, pattern has not been tested for accuracy as of yet.

Posted by TxDove at 1:26 AM No comments:


I have always wanted to knit a circle vest and have saved many a picture of them from various sites. This is a very simple pattern but takes quite a lot of hand converting to make the ribs. Simple, but awkward when going from the back section to the top ribbing section. The vest is knit in a one piece (sort of) rectangle, folded, then sewn partly up the sides to create armholes. 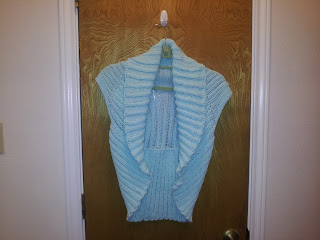 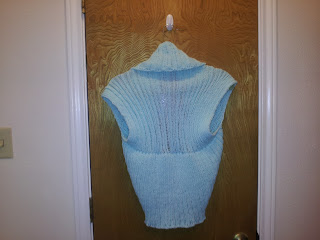 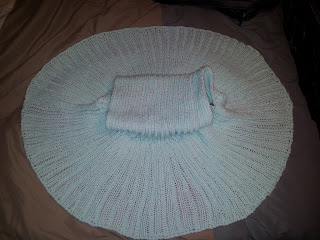 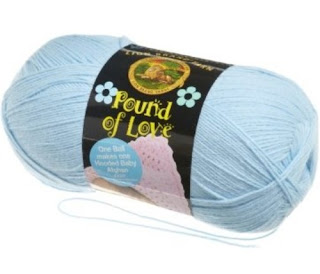 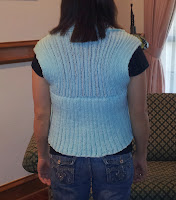 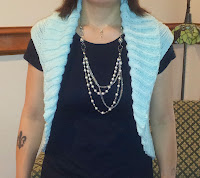 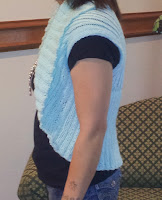 My Notes: WARNING!! These are just notes, pattern has not been tested for accuracy as of yet.